Completely thrilled that our very own Leah Goldstein is nominated as Best Actress at the Canadian Screen Awards!

The CSA’s are essentially the “Canadian Oscars”, and the fact that Leah’s performance in the film has been recognized is not only a total out-of-nowhere surprise, but also a very big deal for a very small film.

If you’re in Canada and haven’t yet seen Leah’s incredible performance in Diamond Tongues, you can rent or buy the film on iTunes!

Great news! Thanks to Factory 25, Diamond Tongues will be opening in New York at the IFP Media Centre on February 19th, 2016 for a one week theatrical run. There will be additional US dates announced shortly, so keep an eye on the Screenings page for the latest. So far we’ve added two screenings in San Francisco as part of the SF Indie Fest. Stay tuned to Twitter or Facebook

If you’ve seen the film then you’ve seen part of the above. Here is the full video of “Edith Welland” on Strombo Tonight. To read the full story behind this clip check out this article.

Diamond Tongues is currently playing at the TIFF Bell Lightbox.

Tickets for our run at the TIFF Bell Lightbox in Toronto are now on sale here:

Showtimes are as follows:

Pavan Moondi and Brian Robertson’s film will get a stateside release via boutique distributor Factory 25.

Pavan Moondi and Brian Robertson’s Diamond Tongues will get a stateside release thanks to a new deal inked with boutique distributor Factory 25.

The feature film earlier secured Canadian distribution via Mongrel Media and will be released in Toronto at the TIFF Bell Lightbox on Aug. 7. It premiered at Slamdance earlier this year.

Brooklyn-based Factory 25 has secured a theatrical release for Diamond Tongues and the film will also be released on Fandor’s SVOD platform. The distribution deal was negotiated by Matt Grady of Factory 25 and Toronto lawyer David Steinberg on behalf of the filmmakers.

Great news! After a great Los Angeles premiere at the Arclight Hollywood and a packed NXNE Sneak Preview in Toronto, one of our favourite distributors, Factory 25 – which has previously released the films of some incredible filmmakers such as Joe Swanberg, Alex Ross Perry, Rick Alverson and many more – has acquired Diamond Tongues!

The film will be released theatrically in New York this Fall day-and-date with a SVOD release on the great cinephile-targeted viewing platform, Fandor.

We’re honoured to have been acquired alongside some other great films from filmmakers whom we admire. Check out more details in Deadline Hollywood, indieWIRE, and The Hollywood Reporter

This is frankly, a dream come true. More news soon!

P.S. We have a new alt. trailer, check it out above.

While critical praise is always appreciated, and something that the forthcoming “Diamond Tongues” has no shortage of, sometimes the sweetest words of appreciation comes from fellow filmmakers. And co-directors Pavan Moondi and Brian Robertson caught the attention of “Results” and “Computer Chess” filmmaker Andrew Bujalski with their film. “A riveting, screen-commanding performance from a fresh face is a rare and magical thing–rarer still is that it lands in the lap of filmmakers who know what to do with it. ‘Diamond Tongues’ had me start to finish,” he said. And today we have the exclusive trailer for the movie so you can get a sense of what Bujalski is raving about.

Led by Leah Goldstein, the movie follows a young woman and aspiring actress who struggles to deal with the success achieved by her friends, while she continues to have difficulties making her dreams come true. And this trailer, powered by Sunset Rubdown’s “Us Ones In Between,” captures the film’s comedic and melancholy spirit quite nicely.

Watch the trailer [at this link] and read our review. “Diamond Tongues” has a string of screenings coming up as well, and you check out those details as well.

In addition to our one week theatrical run at the TIFF Bell Lightbox (announced last week alongside our Los Angeles screening), we will have two special screenings in Toronto this summer…

This screening will be our Canadian Premiere and held at the NXNE HUB at Queen and Spadina. The hub is a loft space and pop-up venue and will surely be a unique place to see the film. We’re working on planning a reception to immediately follow the screening, so stay tuned for details. The screening will feature a cast/crew Q&A following the film. We should note however, that if you’re a stickler for the full cinematic experience with state-of-the-art picture and sound, it might be best to wait for our theatrical run at the Lightbox.

Tickets are available HERE. It’s a small, unconventional venue and could sell out quick.

This screening, which is co-presented by CMW Film Fest, will be a part of the sixth annual OPEN ROOF FESTIVAL at 99 Sudbury. The evening combines food, film, and music (and drinks); and will feature a special musical performance by our Diamond Tongues lead actress and July Talk frontwoman, Leah Fay, doing a rare solo set.

That’s two special screenings and a one week theatrical run, and we promise the movie is worth the price of admission – don’t miss out!

Plenty of news below, plenty more to come.

Diamond Tongues will be screening in LOS ANGELES at the Arclight Cinema on Monday June 15th. Directors Pavan Moondi and Brian Robertson will be in attendance for the screening, which is a part of the Slamdance Cinema Club. Thanks to Slamdance and the Arclight for giving us such a visible platform to share the film. You can see the official announcement HERE and tickets will soon be available online HERE.

Finally, we’re super excited to announce our hometown TORONTO theatrical release, which will begin on August 7th for a one-week run at the TIFF Bell Lightbox. The cast and crew will be in attendance for a Q&A. Having this film open at the Lightbox was one of our goals from the outset so a big thanks to Mongrel Media and the TIFF Programming team for making it happen. You can take a look at the rest of TIFF’s programming for the summer HERE.

There will be more dates announced very very soon, including a couple more chances to see the film in Toronto this summer, as well as in the US and Europe.

Finally you can find our new poster designed and illustrated by brilliant genius Toronto artist, Justin Cozens, below. Justin is well known for his incredible chalk murals at the great Toronto bar Unlovable, and also illustrated the poster for our previous film, Everyday Is Like Sunday. Major thanks to one of our favourite filmmakers, Andrew Bujalski, for a great testimonial which is excerpted on the poster. Go see his film RESULTS, which we saw at Sundance and is hilarious. It opens in Toronto starting May 29th. 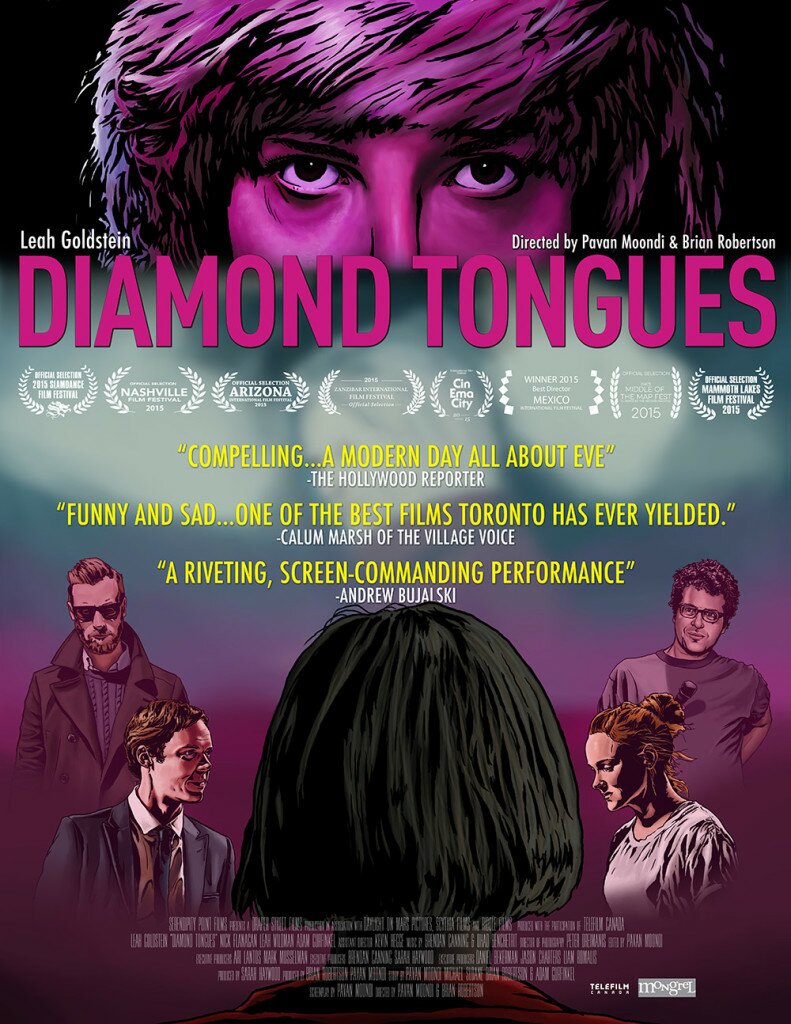 Online tickets for our two screenings in Slamdance are now available! Our World Premiere (January 25th at 5:15pm) will feature lead actress Leah Goldstein in attendance. Directors Pavan Moondi and Brian Robertson will be attendance for both screenings (Screening two is January 28th at 8:50pm) along with actor Nick Flanagan and more assorted cast and crew. Here are the festival’s programming notes:

“What is a frustrated indie actress capable of? Will she lie? Yes. Backstab? Of course — if it gets her an audition, or at least soothes her own failure. Never has the insecurity, jealousy, and destructive navel-gazing of creative pursuit been so spot-on and darkly hilarious as it is in Diamond Tongues. And never has it been so enjoyable to watch. Even though she’s fictional, the relentless and resentful Edith Welland is the most honest actress you’ll see this year in Park City. I guarantee it.” – Aaron Marshall, Programmer & Co-Captain, Slamdance Film Festival