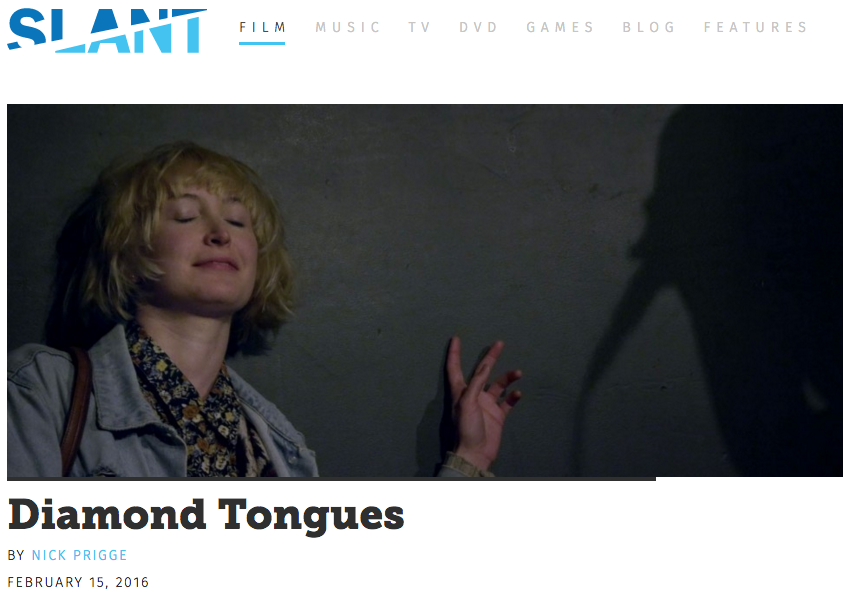 As Diamond Tongues opens, fledgling actress Edith Welland (Fay Goldstein) stands on a struck film set, expressing gratitude about simply getting work as an extra. But upon learning that her ex-boyfriend (Adam Gurfinkel) has landed the lead role in a Z-grade horror flick for which she can’t even get a callback, Edith sees her positivism quickly give way to narcissism, and then abject cruelty as she takes small modicums of revenge against other actor friends whose successes she’s convinced should be hers. There’s a startling, if revealing, moment in Pavan Moondi and Brian Robertson’s film when she sexually pleasures herself while imagining herself making an appearance on a talk show, and her haughty air within the fantasy is no different than in real life; she acts as if she’s already fast-forwarded to the point where she’s achieved fame and is simply waiting for everyone else to catch up.

Less than laser-focused on her career, Edith can’t be bothered to create an acting reel or even bring headshots to an audition. Moondi and Roberston, though, don’t see this as lazy indifference, but a kind of spacey disconnect that escalates with every professional setback she suffers. Rather than confronting her dismal prospects, Edith retreats into a cocoon of self-delusion where she can pretend that her talent is real, and the filmmakers give full shape to the dimensions of her delusion through a series of increasingly agonizing vignettes demonstrating her tenuous hold on reality.

That deception is never more acute than in a scene where Edith makes a meal for two and invites neighbor she doesn’t know to share it with her. Though he accepts her offer, he continually comments on the situation’s palpable strangeness. The guy, it turns out, is an artist—or, he used to be, having quit upon realizing his own lack of skill. The sequence exudes the tone of a wispy rom-com, and this rendezvous hints at the promise of a new relationship for Edith and, in turn, a self-awakening. Instead, the film pivots back to reality when the guy admits he’s engaged and she closes the door, literally on him and metaphorically on the idea of this as her resurrection. This is one of several times that Moondi and Robertson purposely indulge Hollywood formula only to subvert it, intent on allowing their main character to organically, if excruciatingly, find her own way out of life’s quagmire.

The film’s inherent tragedy is that while everyone else so clearly sees where Edith comes up short, she turns a blind eye. Secure in her own starry ascendance, she puts on a premiere for friends of a low-budget indie in which she stars. Rather than becoming the moment of triumph she hopes, however, the finished product is met with derision, and Edith is finally forced to confront the terrifying image of her own impotence as an actress. And if Goldstein effectively rejects empathy throughout, here she invites it, practically crumbling before our eyes. It’s her character’s bottoming out, but it’s also a moment of clarity, when Edith looks in the figurative mirror and gets it together. A sequence late in Diamond Tongue sees her asking someone she hardly knows for absolution. It’s the monologue this inept hack has waited her whole life to give and, miracle of miracles, she nails it.